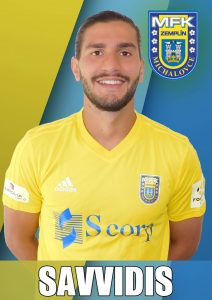 Kyriakos Savvidis (Greek: Κυριάκος Σαββίδης, born 20 June 1995 in Katerini) is a Greek professional footballer who plays as a midfielder for MFK Zemplín Michalovce.

Kyriacos Savvidis at the end of the 2013-14 season, he tied his future with PAOK by making his debut with the first team and celebrating the championship with U-20 as one of the most important players. The 19 years‘ old midfielder signed a new four-year contract that will keep him with the club till the summer of 2018. The young midfielder knows that a signature on a paper can not secure a career and is ready to continue the hard work. „What I did before, I will continue to do now. It does not change anything for me. My own goal is one, the establishment in the first team“ he said.[1]

On 8 July 2016, he signed a two years‘ contract with Panionios for an undisclosed fee,[3] while his previous club PAOK will keep a 30% resale clause.[4]