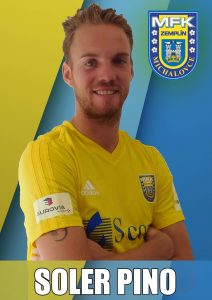 Ian Pino Soler (born 23 January 1996) is a Spanish footballer who plays for MFK Zemplín Michalovce as a central defender.

Born in Prats de Lluçanès, Barcelona, Catalonia, Soler represented CF Damm, RCD Espanyol and UD Almería before moving abroad with Fulham on 5 September 2015.[1] After only playing for the club’s under-23 squad, he returned to his home country the following July after agreeing to a contract with Segunda División B side FC Jumilla.

Soler made his senior debut on 11 September 2016, coming on as a substitute in a 2–0 home win against Real Murcia.[2] On 11 January of the following year, he moved to Málaga CF and was assigned to the reserves in Tercera División.[3]

Soler scored his first senior goal on 22 January 2017, netting his team’s fourth in a 4–3 defeat of CF Motril. He made his first team debut on 28 November, starting in a 1–1 home draw against CD Numancia for the season’s Copa del Rey.[4]